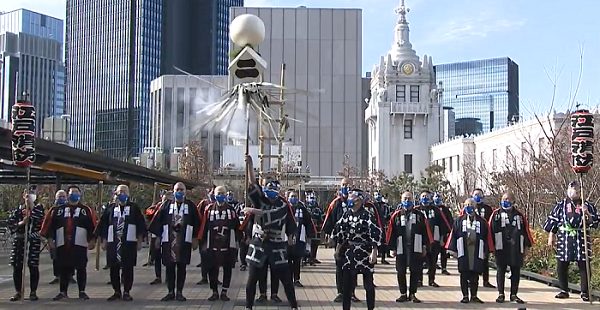 Each year, the Nihombashi Mitsukoshi Main Store holds the “Kiyari Songs, Firefighter’s Standard Bearing Dance, and Ladder Acrobatics” event, a talisman to celebrate the new year which brings to life traditions passed down from the Edo period (1603–1868).

This year’s event was held on January 4, Monday. In consideration of the COVID-19 pandemic, the event took place on the rooftop, not in the Central Hall as in previous years, while customers watched on large monitors in the central hall.

Kiyari are work songs that log carriers would sing when transporting heavy timber and rocks together. 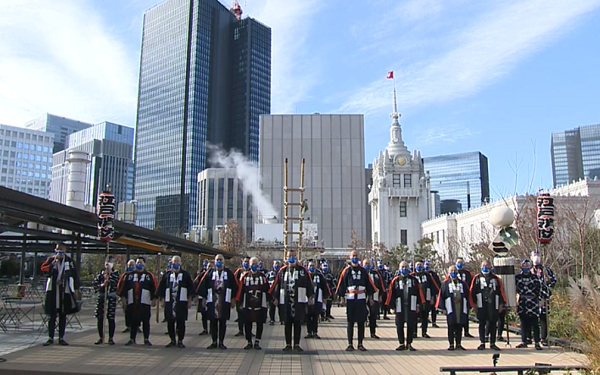 Matoi are a type of standard that each team from the town fire brigades of the Edo period used at that time. These standards were ornately designed in various ways by each team.

The matoi usually has a head part on top which displays the firefighting team, with tassels made from paper or leather, called baren, attached. It starts to dance when held in the hands, lifted up, and spun around. 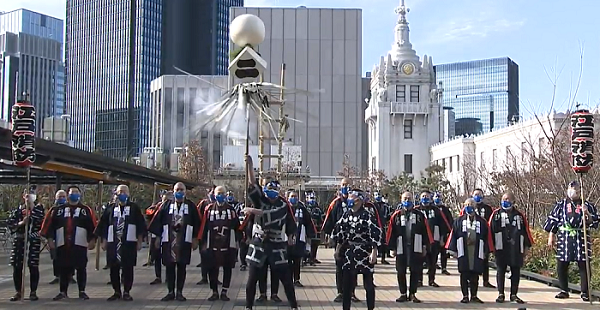 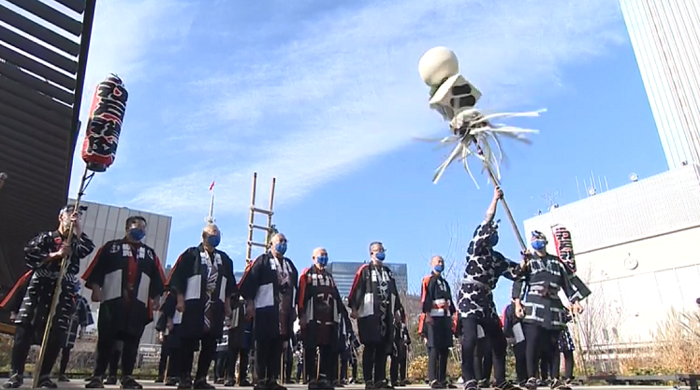 Ladders not only allow us to reach high places, but they were also essential for checking wind direction, locations of fires, and building construction in the past. 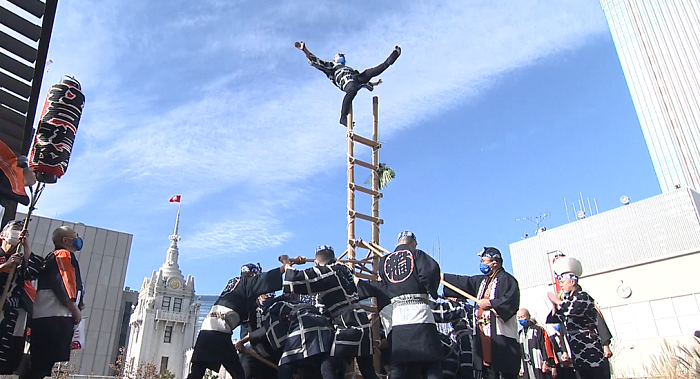 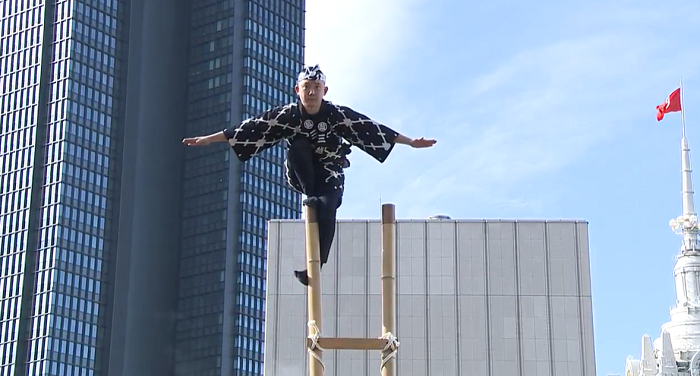 It is said that these traditions originated from the Iroha 48 Gumi, 48 town fire brigades made up of local townsfolk and established in Edo (the former name for Tokyo) around 300 years ago in 1718, during the reign of the eighth Tokugawa shogun Yoshimune. The person who advocated for the creation of the town fire brigades was Ooka Tadasuke, the magistrate of Edo at that time and governor of Echizen province. Firefighting organizations did exist in Edo prior to 1718 in the form of standing armies of firefighters, either directly controlled by the shogun government or operated privately by feudal lords, however ordinary people were left out from these firefighting efforts, unable to receive government protection from fires. Thereby, Ooka established civilian-led town fire brigades which were deeply rooted in the concepts of self-defense and self-governance—in other words, “placing the protection of the town of Edo into the hands of its people.”

At that time, firefighters were mainly chosen from construction workers—commonly referred to as tobi—who were outstandingly brave, agile, and skillful, and as leaders of the civilian fire brigades, they felt a strong sense of honor at being chosen, laying down their lives to fight fierce flames and thick smoke, all while creating the ‘golden days’ of the town fire brigades, along with the Bunka, Bunsei, and Tenpo eras (1804–1844). After that, the town fire brigades were renamed as Shibu Shobogumi (municipal fire companies) following the Meiji Restoration in 1867, and came to protect the city of Tokyo while undergoing multiple transformations.

The Edo Firemanship Preservation Association was established in 1939 by volunteers from the former municipal fire companies in order to teach others about the culture of firefighting that has been passed down in an unbroken line due to the history and tradition of these town fire brigades and municipal fire companies, such as preserving matoi standards, hanten livery jackets, and firefighting tools, etc., and handing down traditional arts such as Kiyari songs, ladder acrobatics, and similar. This firefighting culture is an essential part of the Edo period that cannot be overlooked. Since then, the association has been holding many kinds of cultural events, and continue this to the present day.